I’ve always joked that I’m fortunate to be a less than stellar bike racer: instead of worrying about my place on the podium I tend to have more time to look around and enjoy my surroundings, maybe take a photo or two, talk to some locals during a race – you know, enjoy the experience.  It’s liberating in some ways.  And that was just what I was doing 16 hrs into the Rovaniemi 150 as I hung over my handlebars staring at the puddle of puke I had just liberated onto the pure white snow of the Finnish countryside.  Hmmm, my first time puking in Europe.  I ought to take a picture for the photo album.

Laughing at the thought, I kicked some fresh snow over the mess with my boot before I gave in to the desire to capture the moment. Finland’s a tidy place, might as well keep it that way even if the puddle did resemble an image of the Virgin Mary I had once seen on a piece of toast.  Fame could’ve been mine, but bile doesn’t photograph well in low light so instead I took a deep breath to steady my tormented stomach before I resumed pushing my bike through the unconsolidated snow that comprised this portion of the race route.  Looking skyward for a moment I blew a vapor ring into the depth of night and exhaled.  Sigh… overcooked my talent once again and pushed myself to the point of puking. With around 65 km to go until the finish it was starting to sink in that it was going to be a long night, even for a lucky guy like me.  Lacking anything better to do, I pushed on.

The start of my voyage to Finland had been anything but lucky.  After crossing 10 time zones and passing through 5 airports due to a leg of the flight being cancelled, I found myself anxiously standing at the airport baggage claim wondering in what sort of condition my bike box would arrive.  It turns out my worries about a broken bike were all for naught, however.  It simply hadn’t arrived.  No one seemed to have a clue where it might be or when it might show up either.  Nor was the Finnair lost baggage department  reassuring about the prospect of my bike showing up anytime soon so I left the airport with their non-committal “call us tomorrow” ringing in my ears like so many sleigh bells.  Trying to keep it positive (sure, my bike isn’t here but holy crap, I’m in Lapland!!), I headed off to the hotel with visions of a good night’s rest and my bike magically arriving the next day as if delivered by Santa Claus dancing in my head.

Being the home of Santa Claus (I’m still doubting that claim, not sure they’ve ever heard of North Pole, Alaska), Rovaniemi is a great place to dream of such things actually coming true.  Even though the town is located just a few kilometers south of the Arctic Circle it’s not merely some out of the way destination, far from it.  Rovaniemi is a real “town” with over 61000 inhabitants and there are a variety of things to do there (especially in winter) ranging from xc and downhill skiing to snowmobiling to visiting ice hotels to reindeer drawn sleigh rides under aurora-lit skies.  It’s a winter wonderland and a beautiful area to visit. It’s also a great place to have a winter race.

Which is exactly what race promoter Alex Casanovas thought after returning to the area following his experience racing the Iditarod Trail Invitational a few years back: Finland looks a lot like Alaska, Rovaniemi has great infrastructure, I should organize a race that is easier to get to than Alaska for the many Europeans whom I’m sure will flock to Lapland to tackle a challenging course.  Using an “if you build it, they will come” credo the inaugural Rovaniemi 150 took place in 2012 with 16 participants.  This year’s race had grown to 39 registered starters from 10 different countries last I checked before hopping on the plane.  It just goes to show that the need to get out and do silly things in the snow transcends national origins I guess.

My own silly desire to go to Finland in the dead of winter had been formed last year immediately following my disastrous attempt at the 2012 Iditarod Trail Invitational.  I (like most endurance racing types) don’t deal well with failure and my first attempt at the ITI was a complete and utter failure.  All the training time, money to enter the race and get to Alaska, negotiating vacation time off etc. had been buried beneath 30 inches of fresh snowfall during the first night (along with me) due to my inability to push my bike through hundreds of miles of deep snow.  My “race” had turned into one night curled up like a sled dog in a hole waiting for the snow to stop falling.  It never did stop that night. When I woke the next morning I decided that I was a biker and that pushing my bike through deep drifted snow was not something that I wanted to do for the next several days.  Deciding to turn around and retreat without ever getting out of sight of Sarah Palin’s house was a bitter pill to swallow, so this year I went looking for a race that would fit a new set of criteria.

Actually, the list of criteria was pretty short.  It had to be on snow and it had to be a place my wife wanted to go.  Unfortunately, a trip to Minnesota (for the Arrowhead 135) or Alaska was not on the list this year so when I came across the Rovaniemi 150 while idly surfing the internet one day I proposed the idea of a northern European vacation to her.  She approved.  An action packed plan was made, tickets were booked, training rides were undertaken and the next thing I knew I was staring at the hotel ceiling at 2AM jetlagged out of my brain, unable to sleep and without a bike to ride.  The perfect plan had gone horribly awry.

After consuming mass quantities of cured meats at the hotel breakfast the next morning I waddled on down to join some of the prerace festivities which included a visit to Santa Claus at his Finnish vacation villa just north of town.  A trip to a quaint little tourist trap sitting smack dab on the Arctic Circle sounded kinda fun, plus I had secret plans.  I wanted a bike to ride and Santa was the one I knew who could provide one for me.  At the very least I could find an elf to bribe in exchange for a bike.

As a backup plan I also spoke with the race organizer Alex to see what could be done and he got to work right away making a few phone calls on my behalf.  It seems that lost bikes had been an issue for at least 2 other competitors that had arrived early than I.  One had eventually received his gear, but one racer from the US that had planned on competing on foot never did get her gear and returned to the states before the race even began.  I wondered if I should think about doing the race on foot, or perhaps with this beast I had seen while walking through downtown Rovaniemi.

At Santa’s Village I discovered in short order that this soon after Christmas Santa isn’t particularly motivated, although being a master marketer he is always open for a photo opportunity.  When asked for a bike he said he’d see what he could do.  Maybe I’d been naughty.  I never did find an elf to bribe either as I think they’re all on vacation someplace warmer. 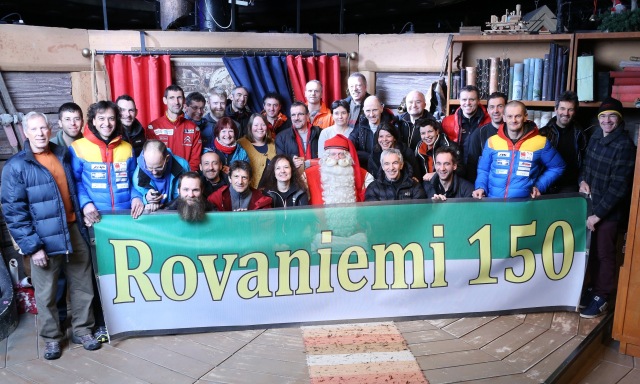 The great thing about competing in races outside your home country is interacting with people from other nations and watching the interplay of cultures that is always evident.  For instance – a racer from France had arrived late back to the meeting point but the Finnish bus driver had a schedule to keep so off we headed toward Rovaniemi, only to turn around when it became apparent that stranding a visiting racer at Santa’s Village was not a good thing to do.  Not to be outdone by their latin brother, the Italians arrived late to the gear check that afternoon which generated much muttering and sarcastic comments from the British competitors.  Meanwhile the Germans and Dutch sat quietly with bemused expressions on their faces wondering why no one could keep to a set schedule.  All that was needed was an American to stand up and loudly tell everyone how he believed everyone else should be behaving.  Since we were such a small group, the Americans among us decided to corral our brash tendencies and just tried to be everyone’s friend.  That tactic worked well as everyone in attendance seemed to be pretty cool (it’s always great to be among kindred spirits) and in the end everything went smoothly as the race was very well-organized.  (If I’ve forgotten to offend any nationalities with my lighthearted joking please let me know and I will add).

Meanwhile, the search party looking for my bike had determined that the box had indeed been located in Amsterdam and an extraction was in process.  Strings were being pulled and favors were being asked in an effort to get it to Rovaniemi in time for this low-grade racer to go out and ride around in the snow.  I arrived at the prerace pizza party wondering if it would show up as I needed to formulate an alternate plan – namely drowning my sorrows with a few beers – if I wasn’t going to be racing, but was reassured by one of the incredibly helpful volunteers (Julian Amorrich) that I would know for sure if it had arrived either way before dinner ended.

The mayor of Rovaniemi spoke, beers were drunk, pizza was consumed and before long Julian strode over to my table with a broad smile on his face “Your bike just arrived at the airport, they’re putting it in a taxi to bring to your hotel.  It will be waiting for you when you get back”.

And so it was. Twas the night before the Rovaniemi 150 and in his cramped hotel room, a creature began stirring and throwing wrenches around the room as he assembled his bike.  Not exactly what I expected to be doing at 8pm the night before a race but hey, at least I was going to get to race! 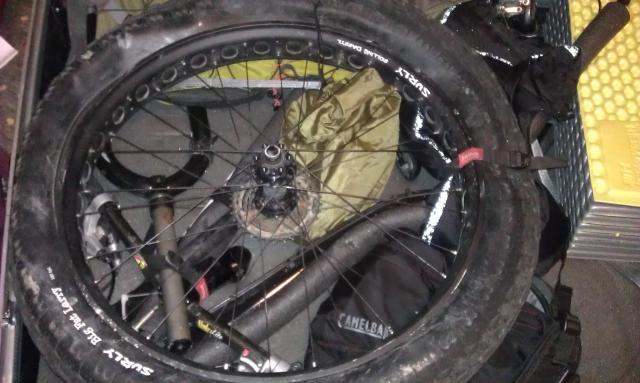 This post is getting long, I’ll finish it up next time…

This entry was posted in Uncategorized. Bookmark the permalink.

a life outside is a life of happiness

Photos and Writing by John Fontanilles

A Human-Powered Exploration of the Altai Mountains

the only certainty is change

Be Happy, Be Me...
Bike life in Swedish Lapland

Bicycling in Newfoundland and other sordid adventures

Dirt road cycling adventures across the Americas and beyond

Nothing compares to the simple pleasure of a bike ride. ~John F. Kennedy